Minister of Foreign Affairs of Bosnia and Herzegovina Igor Crnadak paid on an official visit to Sweden on April 8, 2016. During his stay in Stockholm he met with the Minister of Foreign Affairs of the Kingdom of Sweden, Margot Wallstrom, President of the Swedish Parliament Urban Ahlin and State Secretary in the Ministry of Entrepreneurship and Innovation of Sweden Oscar Stenströmom.
The main topics of the talks between Minister Crnadak at the meeting with Minister Wallström as well as on the luncheon that followed with the participation of members of the Foreign Affairs Committee of the Swedish Parliament and representatives of SIDA were the current political situation in BiH in the context of EU integration, regional cooperation and bilateral relations with emphasis on economic and development cooperation.
Minister Crnadak recalled that after extensive efforts invested over the past period to the fulfillment of conditions, and the start of the negotiation process in order to adapt the Stabilization and Association Agreement, Bosnia and Herzegovina submitted an application for EU membership on February 15, 2016. With gratitude for so far provided strong support Minister Crnadak expressed confidence that Sweden will continue to support Bosnia and Herzegovina on its path towards the EU.
The two ministers agreed that there is great potential for development of economic relationship between the two countries, and that in this context especially important role might have BH diaspora in the Kingdom of Sweden, which has about 57,000 people born in Bosnia who live in Sweden.

Minister Crnadak reminded that during the visit of the Minister Aida Hadžialić to Bosnia and Herzegovinait was  agreed to organize business forum in Sweden.

Minister Crnadak and Minister Wallström talked about the cooperation between the two countries at multilateral level, and exchanged information on various issues of multilateral nature, as well as the opinions and views on major international issues.
During the meeting with the President of the Riksdag Urban Ahlin the good parliamentary cooperation between the two countries was welcomed. The President of the Parliament stressed the strong support of Parliament and the Government of Sweden to Bosnia and Herzegovina EU integration process and expressed willingness to help BiH where its help is needed. For Sweden is not a question of whether BiH will become an EU member but when. He expressed satisfaction with the level of development of bilateral relations between BiH and Sweden and readiness for further improvement of cooperation.
The Minister also met with the State Secretary in the Ministry of Entrepreneurship and Innovation of Sweden Oscar Stenströmom. They discussed the strengthening of economic cooperation between BiH and Sweden. The Minister pointed out that the Council of Ministers is focused on creating a better business environment in BiH, particularly with regard to the rule of law and fight against corruption.
State Secretary Stenström said that BiH is facing a new challenge to create a new import-export strategy that will allow adjustment of the market and increase of economic exchanges and facing the challenge of a new policy of industrialization. He stressed that now is the time to make a new step in the development of economic relations between BiH and Sweden, which will pass from the phase of development aid that Sweden  provides for BiH  in the area of ​​doing business. 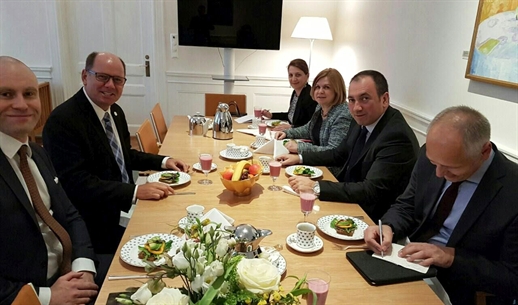 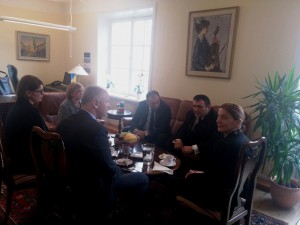